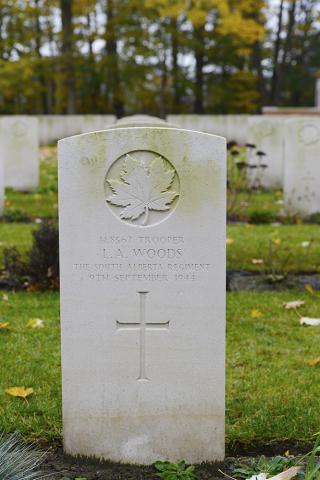 Assigned to the South Alberta Regiment on December 22, 1943.

According to information obtained by Headquarters from Canadian Army Medical Authorities, Trooper Lloyd Alfred Woods died as a result of a bomb fragment wound to the abdomen.

The South Alberta Regiment (29th Armd. Reconnaissance Regt) war diary reports on September 9, 1944:
Clear and warm.
After a fairly quiet night "B" Squadron moved down to square 8793 (Everaertstraat, Oostkamp, Belgium) to support the Argyll and Sutherland Highlanders of Canada and Lincoln and Welland Regiment who were both across the river.
One man from "C" Squadron was wounded when an Artillery shell had a premature explosion by hitting a tree.
Rear H.Q., "A" Squadron and "C" Squadron with Al Ech moved to area of race track at 861926 (Kasteelpark Gruuthuse, Oostkamp, Belgium) at approximately 1230 hrs.
Just before the move Lieutenant J. Patterson was hit by shrapnel from one our own Arty.
"B" Squadron remained at the river in support of the Lincoln and Welland Regiment and Argyll and Sutherland Highlanders of Canada until dark and returned to the Regiment area.
The Commanding Officer held a O Gp at 1500 hrs. The main points being that "B" Squadron would assist the Argylls in expanding the bridgehead, then "A" Squadron, with the LWR would pass through to Veldkapel 8895 (area of Koestraat, Veldstraat and Beverhoutstraat, Beernem, Belgium) and possibly continue to Oedelem 9294 (Kerselaerstraat, Beernem, Belgium).
The Commanding Officer was called to Brigade at 1930 hrs and another O Gp was held at 2030 hrs, the plan being changed.
"B" Squadron now were to enlarge the bridgehead with the Argylls, "A" Squadron to pass through to Oedelem, Belgium, leaving one troop at Veldkapel, Belgium. "B" Squadron would then move on to high ground North of Oedelem, Belgium in the area of Oedelem Berg 9196 (Pinstraat, Beernem, Belgium). "C" Squadron would then pass through to area 9898 (Veldstraat/ Pollepelstraat, Beernem, Belgium) and patrol in force to the bridges in squares 0001 and 9702 (??).
"A" Squadron, less two troops, then move to area of Donk 9699 (Pastoor de Swaeflaan, Maldegem, Belgium) and the Regiment to move across the river at first light.