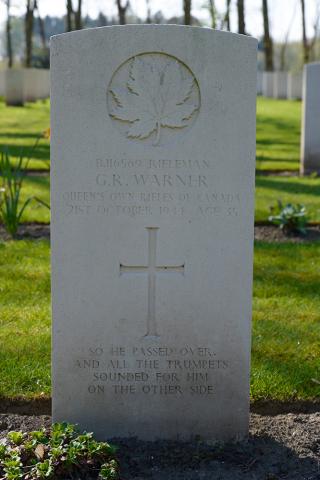 1944-04-18
Completed Basic Training at #20 B.T.C., Brantford.
Completed Corps Training Infantry at A-10, C.I.T.C.
M.F.M. 6 clear.
A man of average appearance and above average ability. Was selected for training as motorcyclist but new trades training quotas prohibit this. Reported on inf training as being conscientious, in good physical condition and a good soldier prospect. Good attitude towards the Army, and Overseas service. Dependable type and possible N.C.O. material. Examination of the foregoing and interview indicate suitability for Overseas service in Infantry (Others) operational. L.E. Browning, Lieutenant.

Assigned to the Queen's Own Rifles on July 17, 1944. (Before Argyll and Sutherland Highlanders of Canada.

His brother Thomas Edward Warner served with the Royal Canadian Air Force and survived the war.

There was occasional shellfire during the night.

1545 We had a grandstand view of Typhoons giving SCHOONDIJKE, Netherlands a going over. This is one of the places that gives us plenty of trouble.

1630 “B” Coy went back as they were stopped by mines. After these had been looked after they went forward but had to consolidate 500 yds short of their objective.