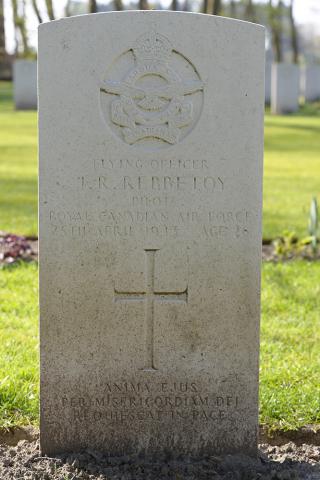 Report 137 R.A.F. Squadron leader: Loss of Whirlwind aircraft P7058.
Flying Officer Rebbetoy took off Manston, UK at 10.35 hrs as No. 2 to Flight Lieutenant Bryan, D.F.C., on a 'Rhubarb' operation to attack railway targets in the Diksmuide, Belgium area. The section crossed the coast at Bray Dunes Plage, France in cloud at 2,000 feet and a locomotive with five trucks was seen near Tielt, Belgium at 11.10 hrs. F/Lt Bryan, making his bombing run to a attack, broke away as he observed Oerlikon and machine gun from each truck and told F/O Rebbetoy by R/T not to attack. He then saw F/O Rebbetoy attacking the train with cannon noticing strikes on the engine and first truck. When new he looked he was a burst of flame rising to 50 feet and smoke in a field very near to the position of the train. Passing in the vicinity 45 minutes later, he noticed smoke still arising from the field. Not further news has been received of F/O Rebbetoy.

A letter from the 137 R.A.F. Squadron leader to his father writes:
Dear Mr. Rebbetoy,

I should like to offer to you my very sincere condolences, and those of the Squadron, on the sad loss of your son, Jimmy.

I should like to say that your son joined my Squadron approximately a year and a half ago as a Sergeant, and from the very moment of joining the Squadron hand shown himself to be a very fine Pilot, exceptionally keen and most efficient, and six months after his joining the Squadron I was very happy to be able to recommend him for a commission, so that he could become one of my Officiers.

Since that time he has done extremely well and was in front line in the Squadron for being recommend for the D.F.C. (Distinguished Flying Cross), and but for his unfortunate loss he would have certainly earned this distinction. Apart from the work side he was very much beloved by the Squadron and he had a personality which we will always remember.

Once again I should like to offer you on behalf of my Squadron very sincere condolences on your great loss.