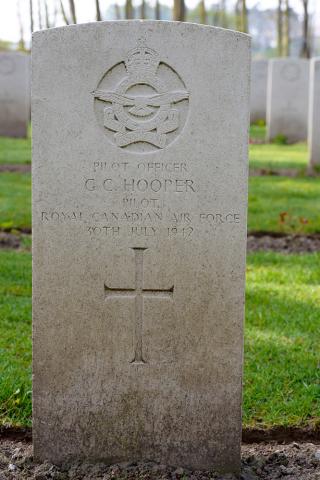 On the evening of 29 July 1942 Wellington Z1316 was the penultimate aircraft to take off from RAF Grimsby. The crew took off at 23:52 hours. A couple of hours later, at 03:15 hours (local time), the inhabitants of the Belgian villages of Olmen and Balen were woken by the sound of an air battle between a German night-fighter and a British bomber. The German machine was a Messerschmitt Bf110, flown by OberleutnantEckart-Wilhelm von Bonin and his radio operator Feldwebel Friedrich Johrden. Von Bonin flew with Gruppe II from Nachtjagdgeschwader 1 (II./NJG1) and was a very experienced pilot. During 150 missions he had shot down 37 allied aircraft. He would serve as Gruppenkommandeur of II./NJG1 from 18 November 1943 till 25 October 1944. He was awarded the Ritterkreuz on 5 February 1944. Bonin died at the age of 72.

The aircraft approached the villages from the east. The British bomber, Wellington Z1316, was fatally hit by the night-fighter and crashed at 03:17 hours in a meadow in Olmen-Heivoort. The night-fighter turned round to assess the situation and to see the crashed Wellington had caught fire. Many inhabitants of Olmen had noticed the crash and came to the crash site. Some of them took pieces from the wreckage. Soon after German troops arrived to guard the crash site. The Wellington was salvaged by the Germans. Three trucks were needed to transport the remains of the aircraft.

All six crew members were killed in the crash. They were initially buried in the local cemetery in Olmen. The remains of the six airmen were buried in four wooden coffins, manufactured by woodworker Louis Mertens. The grave marker however, only mentioned five names. The name of Harold Oates was missing. The inhabitants of Olmen looked after the graves of the crew. In 1953 the six airmen were reburied at the Canadian War Cemetery in Adegem, where they rest in a collective grave. The headstone of Sergeant Kenneth McLennan mentions he was 19 years old at the time of his death. This information is incorrect as he was only 18 years of age.